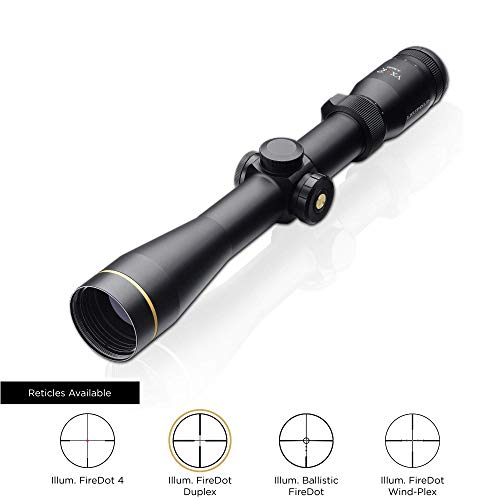 Rifle scopes with illuminated reticles have become increasingly popular over the years, offering many advantages over non-illuminated reticles when shooting in lower light situations. While there are now many different companies producing this type of scope, Leupold remains as one of the best, which you’ll seen in this Leupold VX-R review.

Designed to similar specifications as the Leupold VX-3 , the VX-R illuminated scope is an ideal choice that ensures fast and accurate targeting no matter what light situation you’re facing. Using an LED to add a bright red dot to the center of a standard reticle, illuminated scopes like the VX-R are designed specifically for hunters, making it easier to see the reticle and hit your target time and time again.

Leupold has long had a reputation for producing top quality, upscale optics, and the VX-R series is no different. Still, considering the number of illuminated scopes currently on the market, it is important to look into the VX-R in more detail to see how it stacks up to the competition.

Featuring Leupold’s patented FireDot Reticle System, the VX-R is available in a number of different sizes and strengths, ranging from a 1.25-4x20mm to more powerful 4-12x40mm and 4-12x50mm models. Other sizes include 1.5-5x33m , 2-7x33mm , 3-9x40mm and 3-9x50mm , offering you a range of different options to suit virtually any need. In addition, the company also produces two specialty versions—the VX-R Hog and VX-R Patrol—designed for hog hunting and law enforcement uses, respectively.

Overall Quality (As Compared to Other Illuminated Scopes)

All of the models utilize FireDot fiber optic reticle illumination, which allows you to quickly switch between eight different intensity settings to ensure you can see your target, without the light blowing out the rest of the picture. The brightest setting is a great choice for near dark conditions, while the lowest setting is dull enough to be virtually invisible during the middle of the day.

The illuminated dot immediately draws your eye to the center aiming point to provide quicker, more accurate targeting. In fact, this style of scope actually allows you to focus more on your target and where to place the shot instead of having to focus on the reticle itself. As well, the FireDot system also makes use of Leupold’s Motion Sensor Technology (MST), which senses movement and will turn the illumination off after five minutes of stillness and then turn it back on the instant you move the rifle. This means you won’t have to fumble with dials when that huge buck suddenly appears, as the red dot will be lit before you ever put your eye to the scope. By shutting the light off after five minutes of inactivity, the MST system also helps to preserve battery life.

All of this adds up to the FireDot Reticle System being far superior to the illuminated reticles found on many other scopes. In fact, there’s really nothing negative you can say about the VX-R scopes in this sense.

Unlike most other American-made scopes, which use a standard one-inch main body tube, the VX-R makes use of a slightly larger 30mm solid aluminum tube. Although this makes the scope slightly heavier, it also makes it far more rugged and durable. The exterior lenses on these VX-R scopes also feature the company’s special DiamondCoat, an ion-applied hard lens coating that helps to prevent wear and scratching.

As well, another factor that counts in this scope’s favor in terms of durability is Leupold’s proprietary 2nd-Generation Argon/Krypton waterproofing. By filling the scope with a blend of argon and krypton, Leupold ensures that the VX-R is even more resistant to thermal shock and less susceptible to gas diffusion—and thus more waterproof and fogproof—than its outstanding nitrogen-filled scopes.

Like most other Leupold products , the VX-R riflescope deserves top marks in terms of overall ruggedness, strength and durability. Still, even if you’re not convinced, there’s no need to worry as all VX-R scopes feature the company’s lifetime warranty, which applies to any owner regardless of where you bought it from and without the need for a warranty card or proof of ownership.

With a range of 10 different FireDot reticles to choose from, the VX-R can be customized to match your specific needs and your preferred style. Some of the more commonly available reticle options are designed to replicate the look and feel of Leupold’s most popular reticles, such as the FireDot 4, FireDot Windplex and FireDot Circle.

Designed to resemble the German #4, the FireDot 4 uses 1 centimeter European elevation and windage adjustments and has thick posts that help to instantly draw the eye to the center. All of the other FireDot reticles feature standard American 1/4-inch MOA adjustments, including the popular FireDot Duplex. In addition, Leupold also produces special FireDot Ballistics and FireDot-G BDC reticles designed to make it easier to compensate for distance on longer shots. Alternatively, you can choose one of the scopes featuring the company’s Custom Dial System, which includes a Bullet Drop Compensation dial for quick distance adjustments.

In general, selecting the best FireDot reticle generally comes down to what you’re most comfortable with, as all of them are quite good at certain things.

This is really the only area that the VX-R doesn’t quite perform up to expectations. However, that’s really only in comparison to the VX-3, as overall the image clarity and brightness on the VX-R performs equally as well or even better than many of the top European models. Using its Index Matched Lens System to maximize light transmission, Leupold has created a scope that is both incredibly bright and has a beautiful resolution. Further increasing this are the blackened lens’ edges, which help to improve contrast and reduce glare.

Value for the Money

At the end of the day, it’s probably not that fair to compare the VX-R to the VX-3, even if that’s what Leupold often does. The truth is that the VX-R isn’t quite as high tech and doesn’t have as many features as its popular counterpart, but what it does have is the illuminated FireDot reticle. This makes comparing the two a bit like apples and oranges, which is why it’s important to consider the price of the VX-R on its own and also in relation to other illuminated scopes.

In this regard, the VX-R begins to look like a downright steal, as it only costs around half of what you could pay for some of the other top-of-the-line European-made illuminated scopes. While there are definitely a few scopes that beat it in terms of overall quality and clarity, the outstanding FireDot reticle and the more affordable price combine to make the VX-R hands-down one of the best illuminated scopes in terms of bang for your buck.

As you can see from this Leupold VX-R review, these scopes are a great choice for anyone looking for a high-quality illuminated scope that won’t break the bank, and one that you won’t have to worry about breaking.

Guide to Choosing the Most Accurate Handgun