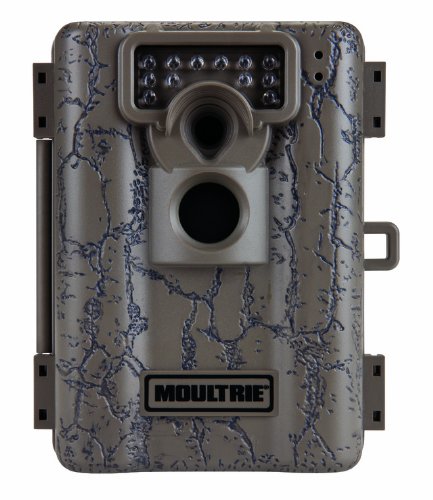 Summary: Not a bad camera, but has its good and bad days.

This basic game camera from Moultrie offers a 5.0 megapixel resolution, video, infrared nighttime options and some other great options. I recently purchased two and set them up in the backwoods during the end of the 2014 deer season. They were a lot of fun, but I also had some issues to be aware of. All in all this is a decent camera for the price, while giving the hunter the edge they were looking for.

My Moultrie A-5 Review and Experience

After harvesting my personal limit on our property I set up two of these from December until mid-February. Apparently quite a lot goes on down there when I’m not there. Some of the best shots you will see alongside my review here in this article. However, I had some trouble with these.

At 5.0 megapixels the resolution is not bad, unless the sun is right on the lens. Keep this in mind for areas that see mostly dusk and evening movements – don’t point it at the sunset. The photos also have the time, moon phase and date stamped on the bottom. These aren’t going to be images you will frame but they will get you what you need – confirmation of target and time.

The infrared images are not bad either. I could always identify individual bucks. I could also identify some of the bigger does with a bit more character to their shape, or blotches and scars on their hides. What I could not always do was see individual tines and get an accurate count of those. It bothered me, but most racks were different enough that I could get the gist of who was who.

The video quality is fairly good. The animals appear lifelike and their movement seems natural. The trigger timing seemed slow on videos because most targets were center of frame. If a creature is moving side to side, the camera leaves you with about five seconds of blank screen after sometimes just seeing a rump. In our state we can bait on private land, so I had the fortune of causing most animals to stop. While you are supposed to put these facing down a trail, not along, trophy bucks just don’t follow those rules.

I have two major gripes about the snapping of images with this device. In many videos the deer look right at the camera. They can hear it turn on, and so could I when I walked by during testing. In many videos the larger, older does bob and weave their heads trying to get a fix. This leaves me doubtful about what I call the “spook factor” and smart stealthy bucks being let on to your presence is a bad thing. However, this fox didn’t seem to care at all and had a nightly routine of marking the corn pile, sometimes eating a few pieces. Deer would come in right before and after too, and that gave me the inspiration to try fox cover scent next year…why wouldn’t you feel safe around the slickest creature in the woods?

Also during testing, when I would walk by, there were several times it didn’t snap at all. I actually waited two, five, and eleven minutes at times, just to prove my point – that this device was missing shots. I later looked at one-minute-interval image collections in order. It was obvious that some series seemed to be missing movements when groups of animals would be hanging out – suddenly I would have a photo with six raccoons spread out about ten feet from each other munching on corn. How six of them all got comfortable during the 1.5 second trigger speed was beyond me, but it was consistent with groups of beavers and deer as well. Suddenly there would be five deer, heads down, munching my corn that I spread out for them. Not sure how they got comfy in 1.5 seconds either. The most telling situation was when the first photo did not snap until a beaver had mowed over a sapling and it started to fall.

These are easy to place with a simple plastic clamp and strap. You can also use the popular Python straps on this device as well. I don’t see the need, but it is nice for those who do. If you need to angle it downward, just place stick behind the top and in between the tree, then tighten it.

There is a bottom plate for attaching to stands or tripods. It seems universal as it worked on my camera tripod. That can be a lot of fun since not every spot has a good tree. Down in thick scrub, or out on a juniper flat is a great spot to use this option.

These take four C sized batteries so they can be a bit heavy. I strap them to my waist using the tree straps and then walk them in without a pack or anything.

This thing is tough. It has a thick walled shell with solid clamps. The seals and gaskets are top-notch. Just holding it tells you that it is durable enough to take a beating, I’m not even slightly concerned about weather damaging it or getting inside.

Unfortunately I had to call them. Fortunately they were awesome, nice, friendly and quick about helping. I mentioned I bought two cameras, and I think that really helped this review’s non-bias. Sometimes a product is just a dud, sometimes the whole line has issues. The technician I talked to indicated the latter – that the Moultrie A-5 is “touchy” as she said.

I had one camera snapping away happily all day long, and another just down the trail giving me nothing. Corn would disappear, new tracks and sign would be all over, but it wouldn’t show me anything. She seemed to have a flow-chart of issues in front of her as she narrowed it down. I would go to the camera sites and shut the cam off. I would remove my labeled memory cards. Then after viewing images and saving the ones I wanted to track, I deleted the data on the memory card at the computer. Then I walked each card back to the same camera it came out of, turned it on, tested it, set it to take shots, and left.

Mind you, I treated both cameras exactly the same, but here is what fixed it on the one that chose to malfunction: Insert the card, turn the cam to setup, select “delete images”, problem fixed. It was just frustrating that the other camera seemed to realize this was pointless, the camera has no built in memory, and it hadn’t taken any shots so it’s not like it reached a cap or anything. It just needed to have that done, so now I do it to both every time.

It takes pictures and videos, is durable, gives you night-time insight, and has a long battery life. It can be touchy and cause you issues. It offers some versatile traits, like the tripod mount. It has a pretty long motion detection range. The resolution is adequate for just about any hunter.

I really don’t like giving something low marks, but at the same time I really don’t like seeing people pick the wrong thing. I would hate for Moultrie to read this and think I am bashing them, I’m just sharing my experiences here, and those were very frustrating. The positive points were that they are easy to work with, this is an entry-level game cam, and many of their other products receive high marks – I just wish I had one of those instead.

Discovering the Best 1911 Pistols for the Money