With so many different trail cameras on the market nowadays, it can often be quite difficult to sort through them all to find the one that is best for your specific purposes. This is especially true when looking for a more affordable, entry-level trail camera, as the market has been flooded with numerous cheap, inferior products. However, as you’ll see from this Primos Truth Cam 35 review, there are still a few gems out there to be found, which offer you a decent camera for an even better price.

Primos’ first foray into trail cameras, the Truth Cam 35 is most definitely an entry-level trail cam, offering a much more basic range of features and functions compared to those found on most higher-end, top-dollar products. Still, while it may not perform quite as well as many others in terms of image resolution and angle of detection, there are a number of areas where it excels, performing equally as well or better than many more expensive cameras in several important factors.

When combined with its low price, this makes the Truth Cam 35 a great choice for anyone looking for an affordable trail camera that will get the job done without breaking the bank. 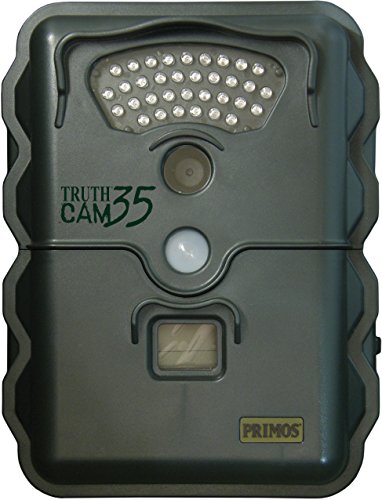 For instance, while the original Truth Cam 35 was a bit big and bulky due to its use of D batteries, the Truth Cam Ultra 35 is much smaller. In fact, it is one of the smaller trail cams on the market, which saves space by using smaller AA batteries instead of D-cell batteries. In addition, the original model sometimes suffered problems with water getting into the SD-card slot, a problem that has been fully corrected on the Ultra. As well, the Ultra can accept up to a 32 GB SD card, a huge improvement over the original, which could only accept up to an 8 GB card (although many users report that 16 GB cards also work in the original).

In truth, despite its lower resolution, the camera does actually take quite decent daytime pictures. However, the lower number of megapixels means that you won’t be able to zoom in on the images when looking at them on your computer, as they become extremely grainy when blown up.

However, nighttime images are definitely more of an issue, as despite using a 35 IR LED flash, night images are generally a bit blurry and suffer from lack of focus. Still, the images are clear enough to easily see what you’re looking at, which helps to explain why this model is so popular despite its fairly poor resolution.

Check this video out for an example of the video quality for both day and night:​

The Truth Cam 35 can be set to capture single images, image bursts and time-lapse photos or to record up to 60-seconds of video with audio. When capturing images, you can choose to have the camera take 1, 3, 5, 7 or 9 images each time it is triggered, while the camera can also record 10, 30 or 60-second videos. You also have the option to set up a trigger delay that prevents the camera from taking another picture for a certain amount of time after the camera is triggered. The trigger delay can be set at 10, 20 or 30 seconds, as well as one, five and 30 minutes.

Setting up the camera and switching between the various shooting modes using the LCD screen is incredibly simple, earning it top marks in this category. As an added bonus, each image is stamped with the date, time, moon phase and temperature.

Recovery time is obviously an important factor in a trail camera. Slow recovery time makes it quite likely that you’ll miss critical moments, especially when shooting image bursts. Both the original Truth Cam 35 and the Ultra have approximately a five-second recovery time, which is actually quite decent and far below the average. Still, these cameras don’t come anywhere near to competing with some of the top-end cameras, some of which feature astonishingly fast one to two-second recovery times. However, five-seconds is still quite respectable, especially considering the Truth Cam 35’s price.

One area where the Truth Cam 35 definitely excels is in terms of trigger speed, coming in well above most other similarly-priced trail cameras. The Truth Cam Ultra 35 features approximately a one-second trigger speed when the camera is in sleep mode (compared to 1.5 seconds on the original), while the speed shrinks to a mere 0.3 seconds when the camera is not in sleep mode. Again, this isn’t quite as fast as many of the more expensive cameras, but it still should be quick enough so you don’t miss anything.

The Truth Cam Ultra 35 also performs quite admirably in terms of its detection range, as its 45-degree PIR sensor picks up movement quite early to ensure that you don’t miss the shot. The Ultra’s 45-degree range is a bit below the average and comes nowhere near the 150-degree range found on top cameras like the Moultrie Panoramic 150. Still, as long as you put a bit of thought into where you place the camera, you shouldn’t have any issues.

The final category we’ll look at is battery life, which is another area where the Truth Cam 35 does a fairly decent job. Powered by 8 AA batteries, this camera has been tested to be able to take more than 50,000 photos on one set of batteries. This means that you can easily leave it out for well over six months to a year without having to worry about the batteries dying.

As you can see from this Primos Truth Cam 35 review, this definitely isn’t the top trail camera on the market. Nonetheless, if you’re looking for a good entry-level trail camera that won’t cost you an arm and a leg, it is most definitely one of the better options out there.